In 2017 a group from First United Methodist Church Round Rock formed an outreach mission called Round Rock Helpers. Modeled after a similar group in Plano Texas, Plano Helpers, the mission of the group of volunteers is to provide free handyman services to seniors and disabled community residents. The scope of the services is limited to smaller tasks that occur around the house.  It also includes providing safety related improvements such as wheelchair ramps, grab bars in showers and tubs, and toilet safety frames. 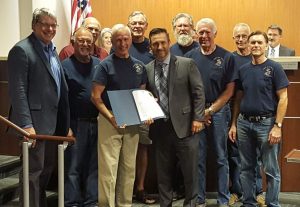 The year 2020, the year of COVID, was a difficult year for everyone. In March, Round Rock Helpers ceased operations as the country went into quarantine. In the third quarter of 2020 Round Rock Helpers very selectively restarted operations doing only outdoor and interior work related to safety items like grab bars, entry ramps, etc., all following safety protocols. During the year 59 new clients were added to the roster and 412 home visits were accomplished.  Even in the worst of times, people need help.